It's been a difficult week. Not just emotionally, although obviously that's part of it. Work has been stressful, as I'm filling in for my boss, and I've also slightly over-committed to Fringe this year, being a dramaturge-mentor for the Outside Eye program as well as a Judge in the performance category.

Then there's all the other crap that's been going on. Like the comments made by this woman, for instance: 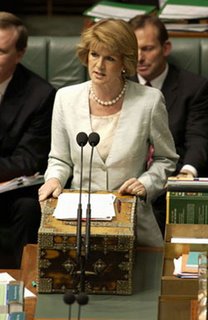 "Hello, I'm a rabid ideologue. Do you like my conservative attire? And aren't my 1950's-esque pearls simply to die for? Actually, a third world labourer probably did, while diving for them. Ahah-ha-ha!"
In case you don't recognise her, that's Federal Education Minister Julie Bishop, who tried to justify the Federal government taking over the state-based curricula currently being taught in Australian schools on the basis that some of what was being taught in our class rooms was coming "straight from Chairman Mao".

Oh, won't someone please think of the children?! 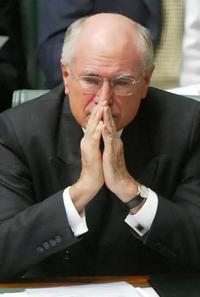 "Please God make the nasty socialists go away; and if it's not too hard, can you get George to say nice things about me again? That would be bonzer. Oh yeah, and if you could just persude Janette to swallow, it would be triffic. Thanks, Lord!"
Yes, little Johnny has attacked our tertiary university system for producing intelligent people who examine the causes of the world's ills and come to the logical conclusions, ie that governments should be focussed upon caring about the greater good, rather than the rights and incomes of the few.

It's depressing, demeaning and infurating that the fate of our country is in the hands of these people. When even former Liberal Prime Minister's say that our current leaders foster intolerance, you know we're in a bad way.

Oh well. At least there are people out there still fighting the good fight, and prepared to stand up for what they - what we - believe. It's people like these that give me hope, and help get me through these dark times.

Right, that's my astute political analysis and satire done for the week. It's time to get back to the Fringe.
Posted by richardwatts at 9:12 pm

...you had me at trying times.

If my mum, a lib voter from way back (I know! what's with that?), thinks there's strange things afoot at the circle k, you know things are pretty bad.

I'm sorry things aren't so rosy for you, you're far too much a divine piece of loveliness for that.

I think it's amusing that the people on the Right always decry the left-wing "intelligensia" who are always espousing such socialist views. And how universities and schools are filled with all these left-leaning people. I have come to the conclusion that such views are the product of education, in that most people who are well educated will see that the arguments and policies of the Right generally aren't that good.

So it's not that the left have infiltrated all our educational and cultural institutions, but that by being educated those people will have more enlightened views.

Sure, the humour is black but you have to appreciate the debacle.

good god, the number of times that reading one of your epic posts about erstwhile adventures has helped me giggle my way out of a funk - well, i owes you a few.

besides, us maoist intellectuals need to stick together...

So it's not that the left have infiltrated all our educational and cultural institutions, but that by being educated those people will have more enlightened views.

Yet, strangely enough, many people become more right-wing in their views as they become middle-aged. So it could be that this view that the left are more educated and enlightened than right-wingers is merely a sign of enlightened arrogance.

Or it could be that in a public education system where the teachers derive their money from a bureaucracy, they are biased towards an economic worldview where bureaucratic systems become larger, and therefore tend to educate children in these way.

Or it could be that the only way to avoid government interference in public schools is to go to a private school. After all, if a right-wing government is seen as being driven by ideology when they make choices regarding a school curriculum, could not exactly the same criticism be levelled at the many Labor governments who have done the same thing?

I just put these suggestions out there because while the coalition government's desire to nationalise the curriculum is immune from criticism, the reactionary commentary it has attracted so far doesn't really amount to criticism, it just amounts to opposition.

I just put these suggestions out there because while the coalition government's desire to nationalise the curriculum is immune from criticism ...

I just put these suggestions out there because while the coalition government's desire to nationalise the curriculum is NOT immune from criticism ...

Richard: Did you read Julie's concerns regarding a school in Qld asking its students to imagine themselves as sexual minorities in a hypothetical 'gay' world? 'Political correctness posing as a cirriculum', apparently. (Of course Labor is just as piss-weak - Beattie also expressed 'concerns'.)

Looks like Julie's joining Vanstone, Ruddock, Hill etc and all the other Lib moderate sell-outs to get a coveted seat in Howard's ministry.

Australia in general does not value education as much as it should. The Government is the root of this value system. I know you are talking about primary and secondary school but...
Look at how university degrees to do with the arts are being generalised. Now instead of a Bachelor of Arts you get a Bachelor of Industries which is the same as what a phys ed teacher, graphic designer, critical theorist, or visual artist gets... Its just not the same thing. All the faculties at Edith Cowan University (WAPPA and SOCCA) had to merge because of funding changes by the goverment. Lectures were sacked, courses were dropped and options became so limited and generic I am glad I finished when I did.
Educated people have always been the biggest threat to Governments like ours which are based on economics and control.

There's a difference between private and public schools, though; public school funding is almost exclusively from government. This isn't the case with private schools. Public schools are much more dependent on government.

"There's a difference between private and public schools, though; public school funding is almost exclusively from government. This isn't the case with private schools. Public schools are much more dependent on government."

If you recall the private schools' squealing like stuck pigs at Latham's proposal to cut the funding to the wealthiest schools, it's fairly obvious that certain private schools are VERY dependent on government. On, to be specific, John Howard's government.

Wrong, Lefty. Any sensible private organisation would do what they could to stop the removal of a significant stream of funding. Even if, as in the case of private schools, it meant making a lot of noise to let the government of the day know what they thought. Anyway, this funding was in previous years maintained by Labor.

I was merely suggesting it as an hypothesis that people in education would be more enlightened... I have heard the argument lots of times that education attracts idealogues but I don't recall anyone putting forward the view that perhaps that way of thinking is a by-product of education. I wouldn't say it's true, it's just a thought.

Also I went to a private school, and the only opinions I seem to recall from teachers were decidedly left-wing and anti-Liberal government: that that such opinions seemed to be foisted upon us.

I've never had a debate happening in my comments section before - I love it!